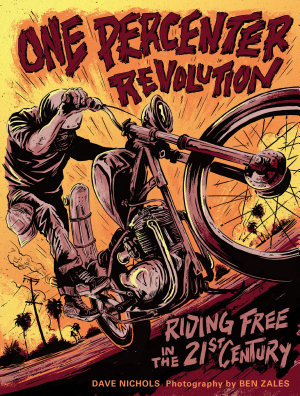 The final chapter of the outlaw biker, One Percenter Revolution rubs noses with modern rebels that are reviving the rebel attitudes of decades passed. Definitely don’t pass these guys on the highway. One Percenter Revolution: Riding Free in the 21st Century finishes the trilogy startedby best-selling author and editor of Easyriders magazine Dave Nichols with One Percenter: The Legend of the Outlaw Biker and The One Percenter Code: How to Be an Outlaw in a World Gone Soft. One Percenter Revolution introduces readers to a whole new generation of rebels dedicated to living on the edge and letting their freak flags fly! The book is populated with nonconformists, from 20-something bikers breathing new life into the 1970s outlaw lifestyle, to city-dwelling café racers who ride the razor's edge. From Euro parkour disciples of danger to wing suited batmen, this revolution is gaining in momentum like a rat rod doing a smoky burnout. One Presenter Revolution follows a whole new generation of wolves thriving in a land of sheep. Sons of Anarchy has inspired young people to don leathers and twist the grip on stripped down motorcycles, looking to quell their thirst for rebellion, and films like Mad Max: Fury Road preaches to would-be War Boys, the stage is set to explore the evolution of outlaw bikers and the revolution of the modern savage.