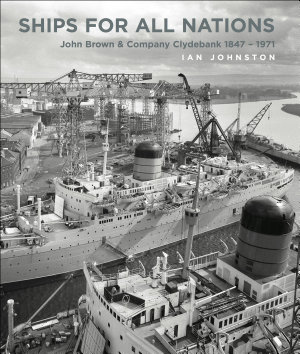 Ships for All Nations Book Details:

“A worthy tribute to the John Brown company and to British shipbuilding . . . a joy to enthusiasts of the great ships of the past.”—Australian Naval Institute The Clydebank shipyard built some of the most famous vessels in maritime history—great transatlantic liners like Lusitania, Queen Mary and QE2, and iconic warships like the battlecruiser Hood, and Britain’s last battleship, HMS Vanguard. Starting life as J & G Thomson in 1847, the business acquired its more famous persona when taken over in 1899 by the Sheffield-based steelmaker John Brown & Co, which enhanced the yard’s existing reputation for turning out first-class products, both naval and mercantile. This book charts the fortunes of the company in terms of its business development, its management and personnel, as well as the great variety of ships it built during the century and a quarter of its existence. It also tells a wider story of the rise to world domination of the British shipbuilding industry and its eventual decline and collapse in the post-war decades, as reflected in the experience of John Brown. Written by an acknowledged authority on Clydeside shipbuilding, the book was originally published in a limited edition in 2000, but this reprint is entirely new and revised, although it retains all the original photographs from the yard’s own unrivaled collection. “Essential to anyone’s maritime collection.”—Sea Breezes “The profusely illustrated, beautifully produced and very detailed story of John Brown & Company.”—Army Rumour Service

Ships for All Nations

Authors: Ian Johnston
Categories: Transportation
“A worthy tribute to the John Brown company and to British shipbuilding . . . a joy to enthusiasts of the great ships of the past.”—Australian Naval Insti

To Amend Merchant Marine Act of 1920