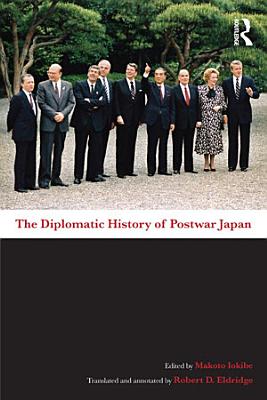 Winner of the prestigious Yoshida Shigeru Prize 1999 for the best book in public history when it was published in its original Japanese, this book presents a comprehensive and up-to-date overview of Japan’s international relations from the end of the Pacific War to the present. Written by leading Japanese authorities on the subject, it makes extensive use of the most recently declassified Japanese documents, memoirs, and diaries. It introduces the personalities and approaches Japan’s postwar leaders and statesmen took in dealing with a rapidly changing world and the challenges they faced. Importantly, the book also discusses the evolution of Japan’s presence on the international stage and the important – if underappreciated role – Japan has played. The book examines the many issues which Japan has had to confront in this important period: from the occupation authorities in the latter half 1940s, to the crisis-filled 1970s; from the post-Cold War decade to the contemporary war on terrorism. The book examines the effect of the changing international climate and domestic scene on Japan’s foreign policy; and the way its foreign policy has been conducted. It discusses how the aims of Japan’s foreign relations, and how its relationships with its neighbours, allies and other major world powers have developed, and assesses how far Japan has succeeded in realising its aims. It concludes by discussing the current state of Japanese foreign policy and likely future developments.

The Diplomatic History of Postwar Japan

Authors: Makoto Iokibe
Categories: History
Winner of the prestigious Yoshida Shigeru Prize 1999 for the best book in public history when it was published in its original Japanese, this book presents a co

Japanese Diplomacy in the 1950s

Authors: Makoto Iokibe
Categories: Political Science
This book provides a detailed examination of Japan's diplomatic relations in the 1950s, an important decade in international affairs when new structures and sys

The History of US-Japan Relations

Authors: Makoto Iokibe
Categories: History
Examining the 160 year relationship between America and Japan, this cutting edge collection considers the evolution of the relationship of these two nations whi

Authors: Kaoru Iokibe
Categories:
Memories can be shared-or contested. Japan and Korea, just one case in point, share centuries of intertwined history, the nature of which continues to be disput

Authors: Kaoru Iokibe
Categories: Japan
"Explores Japan's historical narratives, and their impact on both domestic politics and diplomatic relations, as they have evolved from 1946 to the present"--

The China Problem in Postwar Japan

Authors: Robert Hoppens
Categories: History
The 1970s were a period of dramatic change in relations between Japan and the People's Republic of China (PRC). The two countries established diplomatic relatio

Authors: David A. Conrad
Categories: Performing Arts
The samurai films of legendary Japanese director Akira Kurosawa are set in the past, but they tell us much about the present, as do his crime stories, romances,