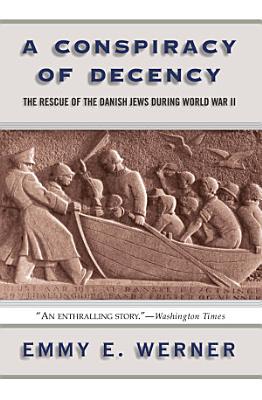 A Conspiracy Of Decency Book Details:

The people of Denmark managed to save almost their country's entire Jewish population from extinction in a spontaneous act of humanity -- one of the most compelling stories of moral courage in the history of World War II. Drawing on many personal accounts, Emmy Werner tells the story of the rescue of the Danish Jews from the vantage-point of living eyewitnesses- the last survivors of an extraordinary conspiracy of decency that triumphed in the midst of the horrors of the Holocaust. A Conspiracy of Decency chronicles the acts of people of good will from several nationalities. Among them were the German Georg F. Duckwitz, who warned the Jews of their impending deportation, the Danes who hid them and ferried them across the Oresund, and the Swedes who gave them asylum. Regardless of their social class, education, and religious and political persuasion, the rescuers all shared one important characteristic: they defined their humanity by their ability to act with great compassion. These people never considered themselves heroes -- they simply felt that they were doing the right thing.

A Conspiracy Of Decency

Authors: Emmy E Werner
Categories: History
The people of Denmark managed to save almost their country's entire Jewish population from extinction in a spontaneous act of humanity -- one of the most compel

Authors: Leo Goldberger
Categories: History
White Cargo is the forgotten story of the thousands of Britons who lived and died in bondage in Britain’s American colonies. In the seventeenth and eighteenth

Boats in the Night

Authors: Leo Goldberger
Categories: History
"An immensely valuable ocntribution. As the last generation of witnesses to the Holocaust testify to its horrors, tehy must also testify to its heroes - those w

Authors: Ann Byers
Categories: Juvenile Nonfiction
"Examines the rescue of the Danish Jews during World War II, including background on Denmark and the Holocaust, firsthand accounts from the many people involved

The Rescue of Danish Jewry

The rescue of the Danish Jews; a primer